Holacanthus tricolor is one of the 7 members belonging to the genus Holacanthus, which together with 7 additional genera make up the family of angelfishes (Pomacanthidae) in which there are currently a total of 89 described species. We will find this species in the waters of the western Atlantic Ocean, from the coasts of Georgia in the United States, to the south of Brazil, including between both extremes the entire Caribbean Sea, as well as Bahamas and Bermuda. They are most common in waters less than 35 meters deep, although the maximum barometric range of the species is at 92 meters. They prefer rocky areas or areas with abundant corals.

The diet of Holacanthus tricolor is omnivorous, finding among its diet sponges, as well as certain algae, and sometimes some corals.

As for reproduction, they reach sexual maturity at 16 and 19 cm in length for females and males respectively. Males form a small harem of up to 4 females. The clutches are very numerous and the females release their eggs into the water column, where the male also releases the sperm to fertilize them. Approximately one day after fertilization, and after being spread by the marine currents, the larvae hatch from the eggs. 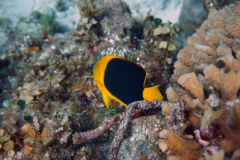 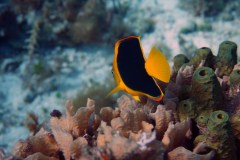 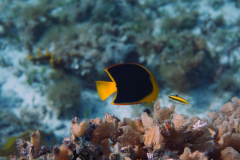 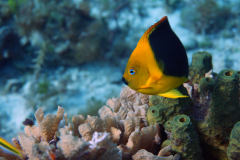 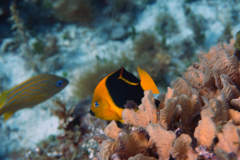