Pomacanthus imperator is one of the 13 members belonging to the genus Pomacanthus, which together with 7 additional genera make up the family of angelfishes (Pomacanthidae) in which there are currently a total of 89 described species. This species is found in the waters of the Indian and Pacific Oceans, from Mozambique to the Red Sea in the west, to southern Japan, Australia and the Line Islands in the east. It inhabits reefs and grasslands with waters up to 100 meters deep.

Pomacanthus imperator is a very showy species with a very striking pattern and colors. Juvenile specimens are very different in color and pattern from adult specimens, so much so that it seems difficult that they are the same species. Juveniles have a dark blue color with concentric curved lines that alternate in color between pale blue and white. These lines form concentric spheres on the back of the body of juveniles, while the lines on the front of the body lose their curvature and become vertical. The dorsal fin has a white margin, while the caudal fin is transparent.

The diet of Pomacanthus imperator is based on sponges and other encrusting organisms such as tunicates, although juvenile specimens are known to deworm other larger species, so they get an extra in their diet. 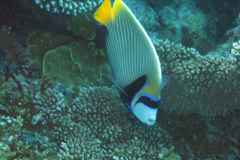 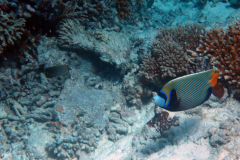