Pomacanthus paru is one of the 13 members belonging to the genus Pomacanthus, which together with 7 additional genera make up the family of angelfishes (Pomacanthidae) in which a total of 89 species are currently described. It is a relatively common species along the western coasts of the Atlantic Ocean (from New York to Brazil, being present throughout the Gulf of Mexico and the Caribbean Sea), where it inhabits depths of up to 100 meters on coral reefs.

Adult specimens of Pomacanthus paru have black body and fins, with scales behind the nape of the neck and the abdomen with golden yellow edges. The head region is of blue-grayish color, with the area of the jaws and mouth white. Surrounding the eyes we observe a yellow ring, whose lower edge has a blue line. Moving behind the head, we find at the base of the pectoral fins, a wide yellow-orange stripe. Finally, the dorsal fin filament is also yellow-orange. Unlike adult specimens, juvenile specimens of Pomacanthus paru have a very distinct coloration. While maintaining the black color of the body and fins, with the edges of the scales in this case of a paler yellow color, juvenile specimens are characterized by 5 pale yellow stripes along the body that run from the upper edge of the body to the bottom. The first of these is located behind the mouth and the second behind the eyes, both stripes being practically vertical. The third stripe is located behind the pectoral fins, and in this case the stripe is arched, starting at the dorsal fin filament and running down to the belly. The fourth stripe is located in the posterior third of the dorsal fin and runs to the center of the posterior third of the anal fin. Finally, the fifth stripe is at the base of the caudal fin. These last 3 stripes take the shape of the letter 'C'. Finally, the caudal fin of juveniles has the same pale yellow posterior edge as the 5 stripes of the body.

Sponges, bryozoans, zoanthids, gorgonians, tunicates and certain algae are the basis of the diet of Pomacanthus paru. Generally we will observe this species forming pairs that swim not far from each other. It is a territorial species, which will not hesitate to defend its territory against other pairs of the same species. 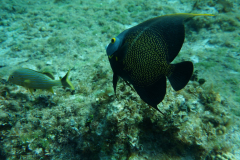 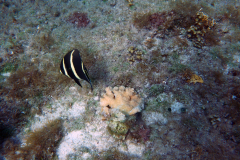 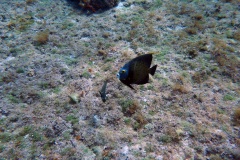 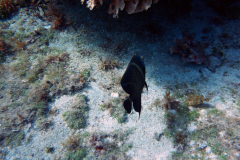 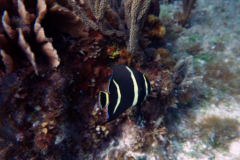 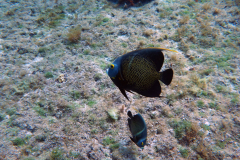 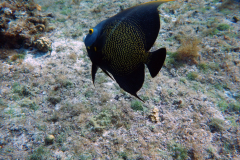 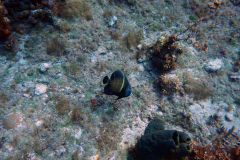 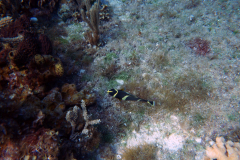 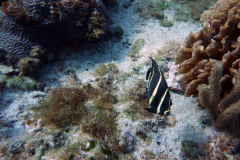 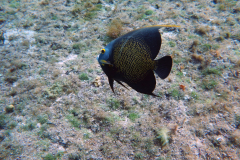 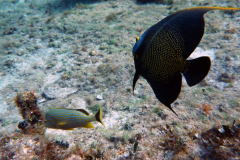