Pygoplites diacanthus is the only member of the genus Pygoplites, which together with 7 additional genera make up the family of angelfishes (Pomacanthidae) in which a total of 89 species are currently described. The royal angelfish is widely distributed in the Indo-Pacific. The species is found in the Red Sea and Indian Ocean, around East Africa and the Maldives, and extends to the Tuamoto Islands, New Caledonia and the Great Barrier Reef. The northernmost limits of its range end in the southern East China Sea, around Taiwan and the Ryukyu and Ogasawara Islands of Japan. It occurs in depths ranging from 0 to 80 m, in coral-rich areas of lagoons, reefs, and are also often found in the vicinity of caves.

The coloration of Pygoplites diacanthus may vary as regional differences may occur, especially in the Indian Ocean, Red Sea and South Pacific Ocean populations. However, it has in common that its body is bordered with narrow blue-white and orange stripes that are narrow and form a backward angle. The back of the dorsal fin is black or blue with blue dots close together, and the back of the anal fin has alternating yellow and blue bands that run parallel to the outline of the body. The caudal fin is yellow. Juveniles have a large dark spot on the basal part of the soft ray region of the dorsal fin.

Pygoplites diacanthus is a carnivorous species that feeds on sponges and tunicates found in reefs and underwater caves. It is a non-migratory species that can be found solitary, in pairs or in groups. Juveniles usually take refuge in cracks and crevices.

As for the reproduction of Pygoplites diacanthus, this usually occurs at dusk or early evening, when the females spawn, performing a spiral dance before the eggs and sperm are released into the water column for fertilization to occur. 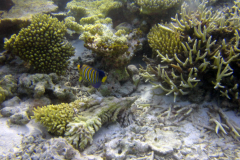 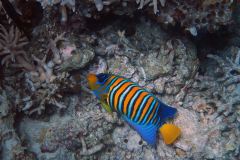 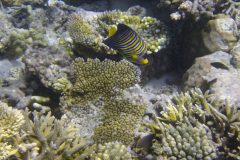 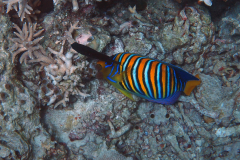 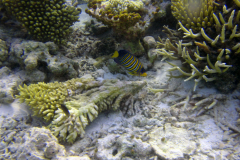 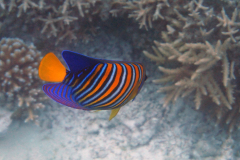 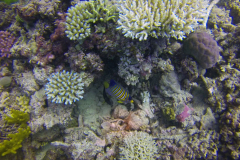 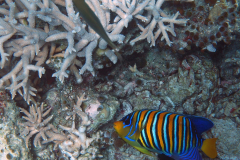 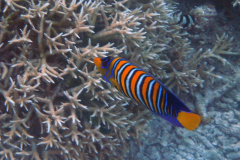 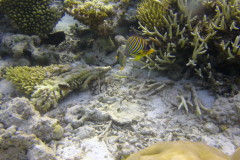