Chaetodon auriga is one of the 88 members belonging to the genus Chaetodon, which together with 11 additional genera make up the butterflyfishes family (Chaetodontidae) in which a total of 129 species are currently described. It is a fish found in coastal waters and associated with reefs, sandy and rocky bottoms at depths of less than 40 meters, although it has been reported in isolation at depths of up to 60 meters. Its distribution is wide in the Indian and Pacific Oceans, from the Red Sea and East Africa, to Hawaii, the Marquesas Islands, southern Japan and Australia's Great Barrier Reef.

As for the color of the body of Chaetodon auriga, it is white with a yellow diagonal at the rear. Along its body there are dark lines parallel to each other, which are arranged in two zones whose lines are rotated 90 degrees with respect to each other. That is, the lines that emerge behind the face and up to the pectoral fin are oriented upwards, while those that emerge behind the pectoral fin are oriented downwards. It also highlights a wide black mask that arises slightly above the eyes, and that crosses them vertically to the ventral end of the face. The caudal fin, is mostly yellow, but has the most extreme edge of translucent color and prior to this edge an orange stripe.

The diet of Chaetodon auriga is omnivorous, feeding on coral polyps, anemones, polychaetes, small molluscs and small crustaceans. Occasionally it supplements its diet with phytoplankton and algae. 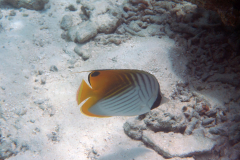 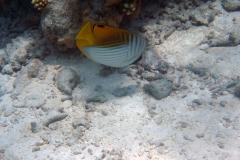 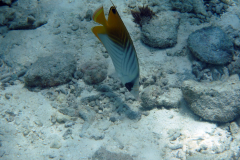 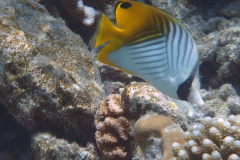 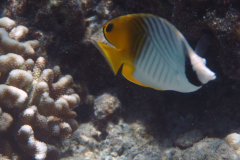 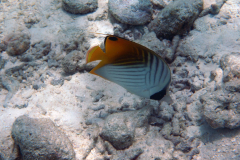 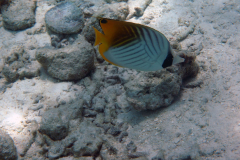 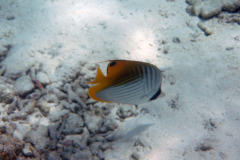 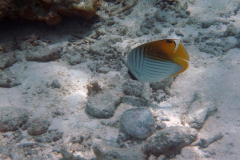 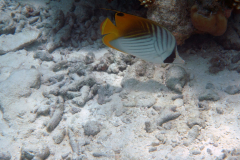 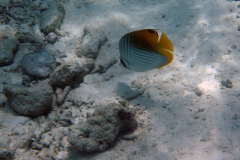 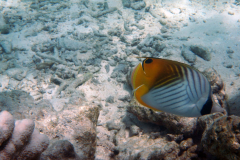 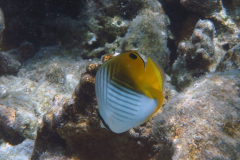 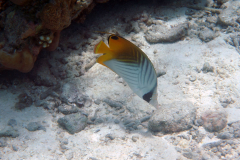