Chaetodon capistratus is one of the 88 members of the genus Chaetodon, which together with 11 additional genera make up the butterflyfishes family (Chaetodontidae) in which a total of 129 species are currently described. It is the most common butterflyfish species found in the Caribbean Sea, although its distribution ranges from the coasts of North Carolina in the United States to Brazil, being present in between in Bermuda and the Gulf of Mexico. It prefers rocky and reef bottoms, with juveniles preferring Thalassia seagrasses.

The general coloration of the body, head and fins, except for the ventral fins, is pale gray. The sides of the body are decorated with a pattern of fine dark lines. Chaetodon capistratus has a brown vertical stripe on the face, which covers the eye, and is bordered in white. Its most distinctive feature is a black spot, surrounded by a white ring, in the shape of an ocellus, located under the posterior part of the dorsal fin. The pelvic fins are yellow. The dorsal, anal and caudal fins have a darker band, parallel to their margins and bordered with thin lines towards the outside, first with a dark and then a white one. Juveniles have the distinctive ocellus placed lower, in front of the caudal peduncle, with young age they have one more ocellus on the posterior end of the dorsal fin, and another broad black band on the anterior part of the body.

The diet of Chaetodon capistratus is omnivorous, finding among its food certain coral polyps, small invertebrates, tunicates, and small crustaceans.

As for reproduction, it is a species with separate sexes, in which from young they form pairs that can be long-lasting. After an energetic and long courtship, at dusk, the female will release between 3 and 4 thousand small eggs that are quickly fertilized by the male. These fertilized eggs will become part of the plankton and hatch 24 hours after fertilization. The larvae are characterized by a bony armor on the head that protects them during this critical phase. These larvae are known as 'Tholichthys' and are silvery-gray, almost transparent. When they reach 20 mm in size, they settle overnight on the bottom and by the next sunrise they will have transformed into juveniles. 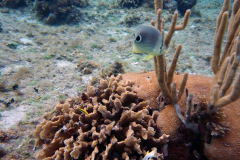 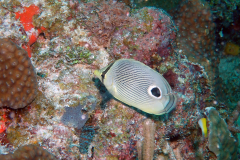