Chaetodon falcula is one of 88 members of the genus Chaetodon, which together with 11 additional genera make up the butterflyfishes family (Chaetodontidae) in which a total of 129 species are currently described. This species inhabits the tropical waters of the Indian and Pacific Oceans, from the east coast of Africa to Indonesia and the island of Java. It inhabits the outer edges of coral reefs, in areas with strong currents or even inside coral lagoons, and always in relatively shallow waters being rare to observe them beyond 15 meters deep.

It is usual to observe specimens of Chaetodon falcula either in pairs or in small groups of at most 15-20 specimens. The feeding of this species is strongly conditioned by the specialization of its snout and its small mouth. Among the prey we find small invertebrates and polyps of some corals.

The reproduction of Chaetodon falcula occurs just before sunset, at which time schools of specimens release eggs and sperm into the water column for fertilization to occur. The resulting larvae are planktonic and will be disseminated by the dominant currents in the area. 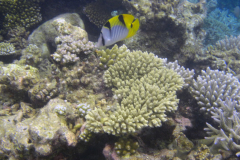 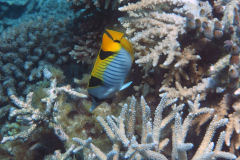 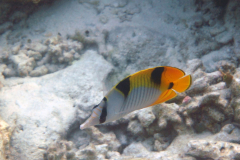