Chaetodon guttatissimus is one of 88 members of the genus Chaetodon, which together with 11 additional genera make up the butterflyfishes family (Chaetodontidae) in which a total of 129 species are currently described. This species is distributed throughout the tropical waters of the Indian and Pacific Oceans, from the east coast of Africa to Indonesia and Australia. It is rare to observe them deeper than 25 meters, and as for the habitat they are not particularly select, being able to observe them both in the outer reefs and in the most sheltered lagoons.

The general coloration of the body of Chaetodon guttatissimus is yellowish cream, with a dark, vertical dotted pattern on the upper half of the body, and a horizontal one, with slightly smaller and more spaced dots, on the lower half. The margin of the dorsal fin is yellow, with luminous orange above the caudal peduncle.

The small size of the mouth conditions the prey on which Chaetodon guttatissimus feeds, among which we find small polychaetes, some coral polyps and certain algae.

Reproduction of Chaetodon guttatissimus occurs just before sunset, at which time schools of specimens release eggs and sperm into the water column for fertilization to occur. The resulting larvae are planktonic and will be disseminated by the dominant currents in the area. 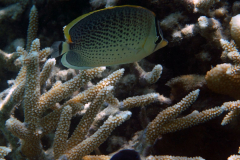 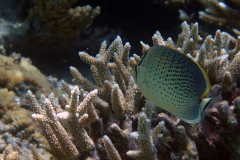 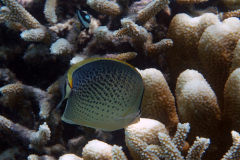 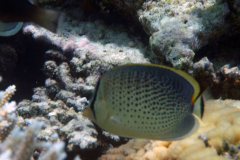 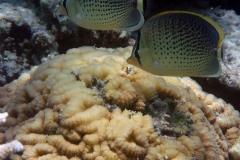 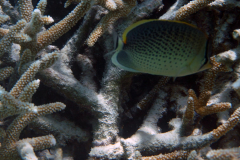