Chaetodon lineolatus is one of 88 members of the genus Chaetodon, which together with 11 additional genera make up the butterflyfishes family (Chaetodontidae) in which a total of 129 species are currently described. Specifically, we will find this species in the vast tropical waters of the Indian and Pacific Oceans, from the Red Sea and the east coast of Africa, to southeastern Japan and the Hawaiian archipelago.

The body of Chaetodon lineolatus is characteristic of butterflyfishes, that is to say a laterally compressed body, more or less oval in shape, and with an elongated rostrum at the end of which we find a small mouth with relatively large lips. It is the species within the genus Chaetodon that reaches the largest sizes, being able to reach up to 30 cm of maximum total length. The specific epithet of this species, lineolatus, refers in Latin to the presence of small and thin vertical bands on its body. The dorsal fin has 12 spiny rays followed by 24-27 soft rays; the anal fin has 3 spines and 19-22 soft rays; the ventral fins have 1 spine and 5 soft rays; the pectoral fins have 16-18 soft rays; and finally the caudal fin is more or less truncated.

The diet of Chaetodon lineolatus is based on small benthic invertebrates and occasionally some algae and polyps of corals and anemones.

It is common for specimens of this species to form pairs, although sometimes we can also observe them alone or in small groups. It is believed that the reproduction of this species occurs during the new moon period, a period in which they take advantage of the darkness for the formed pairs to release eggs and sperm into the water column to fertilize the eggs. 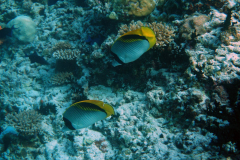