Chaetodon lunula is one of 88 members of the genus Chaetodon, which together with 11 additional genera make up the butterflyfishes family (Chaetodontidae) in which a total of 129 species are currently described. This species is widely distributed in the tropical waters of the Indian and Pacific Oceans, from the coasts of East Africa to Hawaii and from the Marquesas Islands to southern Japan. It is absent in the Red Sea. It prefers the calm waters of shallow reefs, as well as lagoons and seagrass beds, where it is found at depths of no more than 30 meters.

As for the striking coloration of the body of Chaetodon lunula, the base color is yellow. It presents a wide vertical band that crosses its eyes, after which we find a white stripe from the nape to the base of the pectoral fins, completely covering the operculum. Behind this white spot, we find two triangular-shaped spots oriented towards the back of the body, which are black. After these black spots, we find reddish-brownish lines that run inclined towards the belly, where they eventually fade into small dots. The dorsal, anal and caudal fins are yellow, with translucent edges preceded by a thin black line and an orange area. In its body also highlights a black spot on the caudal peduncle, whose upper margin extends diffusely along the back of the base of the dorsal fin.

Nudibranchs, small polychaetes, crustaceans and generally small benthic organisms as well as some algae make up the diet of Chaetodon lunula. 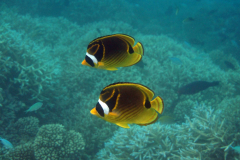 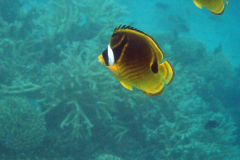 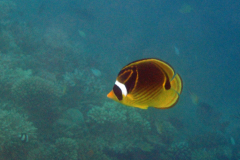 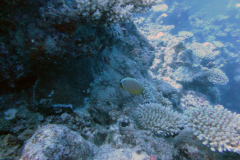 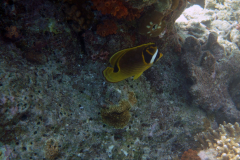 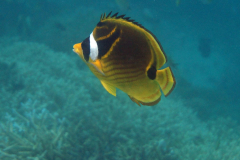 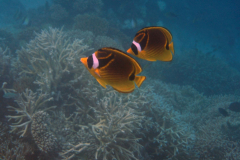 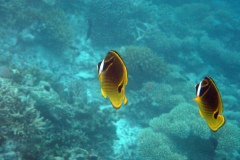