Chaetodon ocellatus is one of 88 members of the genus Chaetodon, which together with 11 additional genera make up the butterflyfishes family (Chaetodontidae) in which a total of 129 species are currently described. This species is found in the waters of the western Atlantic Ocean, from the coasts of New England, the entire Gulf of Mexico, the Caribbean Sea and as far as Brazil. It is a species with a preference for coral reefs.

As for the coloration of Chaetodon ocellatus, the body is white, with the dorsal, anal, caudal and pelvic fins of yellow color that adopts a more intense color in their respective posterior parts. It has a stripe that starts at the beginning of the dorsal fin, and making a 'C' shape that goes through the center of the eye to the base of the operculum. Its specific name ocellatus refers to a dark spot on the back of the dorsal fin, next to its base. Likewise, the males have a second black spot, this one more intense but smaller in size in the part of the dorsal fin where the angle towards the caudal peduncle is created.

The diet of Chaetodon ocellatus consists predominantly of benthic invertebrates that it captures while patrolling the bottom of coral reefs. We will usually observe this species in pairs. 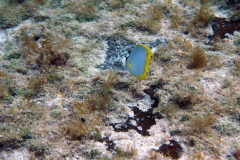 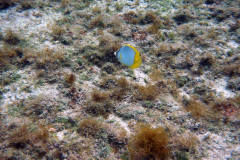 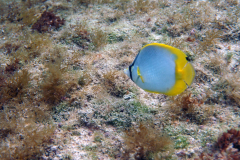 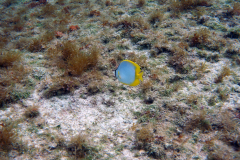