Chaetodon trifascialis is one of 88 members of the genus Chaetodon, which together with 11 additional genera make up the butterflyfishes family (Chaetodontidae) in which a total of 129 species are currently described. This species is distributed over a wide area comprising the Indian and Pacific Oceans, from the east coast of Africa, covering the entire Indian Ocean and in the Pacific as far as the Line Islands and Australia. It inhabits the semi-protected waters of the seagrass meadows as well as shallow lagoons, usually in places with large presence of corals of the genus Acropora, and up to depths of 30 meters.

Adult specimens of Chaetodon trifascialis are usually solitary or form pairs during the breeding season. The diet of this species is based on the polyps of the Acropora corals among which they shelter, as well as the mucus generated by these corals. 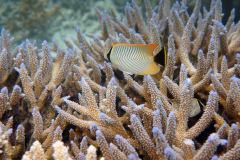 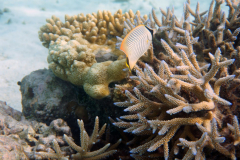