Chaetodon xanthocephalus is one of the 88 members belonging to the genus Chaetodon, which together with 11 additional genera make up the butterflyfishes family (Chaetodontidae) in which there are currently a total of 129 described species. It is a species that inhabits the waters of the western Indian Ocean, especially on the east coast of Africa and Madagascar, although it is also present at the other extreme, for example in the Maldives. Generally, we find this species in waters between the surface and 20 meters deep, in habitats such as lagoons and coral reefs.

Chaetodon xanthocephalus is a species that we will either find solitary or forming small groups of no more than 5-6 individuals. It is a territorial species and quite aggressive towards other species of the same genus. During the reproductive season, pairs are formed that will release eggs and sperm into the water column, so that fertilization occurs and the dominant currents spread their small eggs over a vast territory. Approximately 30 hours after fertilization, the fry will hatch and live for a long period pelagically. 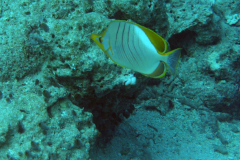 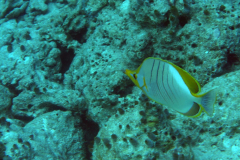 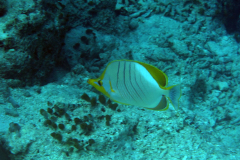