Forcipiger flavissimus is one of the 3 members belonging to the genus Forcipiger, which together with 11 additional genera make up the butterflyfishes family (Chaetodontidae) in which there are currently a total of 129 described species. It is the most widely distributed of all the butterflyfishes, covering territories of both the Indian Ocean and the Pacific Ocean. It is present from the waters of South Africa and Madagascar, the Red Sea and Persian Gulf, Maldives, to Australia, Indonesia, New Guinea, and as far south as Japan. In the Pacific it is present as far as Easter Island, Hawaii, Galapagos and even in the Mexican Pacific coast and the Gulf of California. It is associated with coral environments up to 50 meters deep.

The diet, as can be deduced from its more than specialized snout, is based on small animals that can be found among the corals and rocks, such as some crustaceans, hydrozoans and polychaetes.

Forcipiger flavissimus is usually a solitary species but it is also possible to find it in small groups. During the reproductive season they form pairs that will release eggs and sperm into the water column, so that fertilization occurs and the dominant currents spread their small eggs over a vast territory. 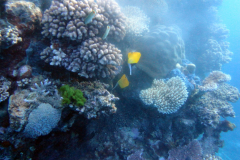 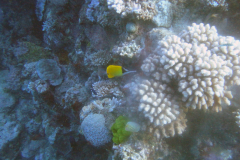