Hemitaurichthys zoster is one of the 4 members belonging to the genus Hemitaurichthys, which together with 11 additional genera make up the butterflyfishes family (Chaetodontidae) in which a total of 129 species are currently described. This species is widely distributed in tropical and subtropical waters of both the Indian and Pacific Oceans, occurring from the east coast of Africa to Indonesia in the Indian Ocean and from India to the Mauritius Islands in the Pacific. Generally, this species is usually found in waters between 2 and 40 meters deep in lagoons, reefs and rocky slopes.

Hemitaurichthys zoster is an omnivorous species that feeds on both algae and zooplankton. They usually form large aggregations of hundreds of individuals, as the schooling effect gives them some security to be able to move away from the corals where they live and feed on plankton.

During the reproductive season, pairs are formed that will release eggs and sperm into the water column, so that fertilization can occur and the dominant currents spread their small eggs over a vast territory. 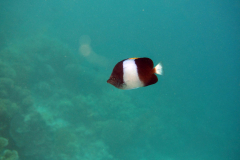 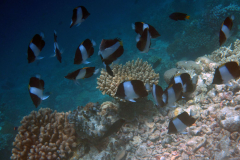