Heniochus acuminatus is one of the 8 members of the genus Heniochus, which together with 11 additional genera make up the butterflyfishes family (Chaetodontidae) in which a total of 129 species are currently described. This species occurs in both tropical and subtropical waters of the Indian and Pacific Oceans. Its distribution ranges from the east coast of Africa, the Red Sea to Polynesia, southern Japan and the Great Barrier Reef of Australia. It inhabits waters between 15 and 75 meters deep, in regions of the inner lagoons of reefs, the channels that intercommunicate them and even on the outer slopes of the reefs.

The body of Heniochus acuminatus is flattened, more or less circular in shape, with a flat but tall rostrum and a very short snout. They can reach 25 cm in total length. The dorsal profile of the rostrum is convex, while the ventral profile is concave. The dorsal fin has 11 to 12 spines and 22 to 27 soft rays. After the first spines of the dorsal fin, the dorsal fin extends in the form of a long filament that can be longer than the length of the animal itself. The anal fin has 3 spines and 17-19 soft rays. The caudal fin is relatively small and slightly rounded.

The angelfish pennant is a sociable species, usually found in pairs or in relatively numerous schools. It is a very calm species, and rarely territorial. It is common, especially in juvenile stages, that specimens of this species act as cleaners or dewormers of other species of larger fish.

The diet of Heniochus acuminatus is based primarily on zooplankton and small invertebrates found among corals or rocky bottoms, as well as some polyps of certain corals, such as species of the genera Clavularia or Zoanthus. 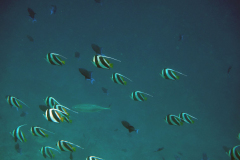 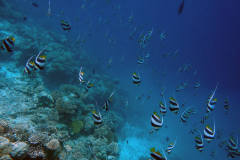 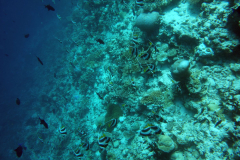 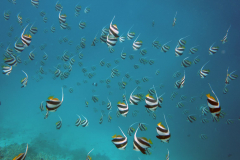 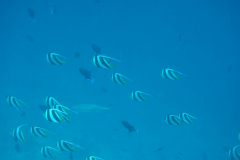 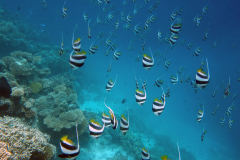 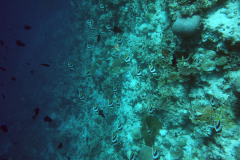