Heniochus pleurotaenia is one of the 8 members belonging to the genus Heniochus, which together with 11 additional genera make up the butterflyfishes family (Chaetodontidae) in which a total of 129 species are currently described. The indian bannerfish is widespread distributed in the tropical and subtropical waters of the central Indo-Pacific, from the Maldives to the west coast of Thailand and from the southern tip of India to Java (Indonesia). It inhabits coral-rich areas of shallow lagoons and outer reef slopes from the surface to a depth of 25 meters.

The body of Heniochus pleurotaenia is decorated with three dark brown stripes on a white background, with yellow shades on the rest of the dorsal and caudal fins, while the pelvic fins are black. The first of the stripes extends from the top of the head, across the front of the head, eyes, and the tip of the mouth. The second stripe covers a large part of the pennant and the first spines of the dorsal fin, covering the pectoral fins, up to the pelvic fins. And the third stripe, more unusual in the genus, which joins the second at the first dorsal fin rays, covers the posterior part of the body, up to the anal fins. Both the second and third bands that cross its body, lose their dark tone from the middle, turning to a noticeably lighter shade of brown.

It is common to observe specimens of Heniochus pleurotaenia living in pairs or in aggregations of 20 to 30 specimens. The diet of this species is mainly based on zooplankton, supplemented with crustaceans, annelids and various benthic invertebrates.

The reproduction of Heniochus pleurotaenia is by external fertilization, for which pairs are formed that spawn between 3 and 4 thousand eggs in the dominant currents of the region, which are responsible for disseminating their offspring. 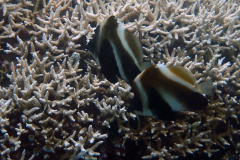 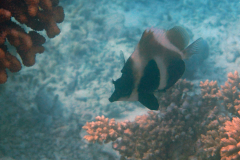 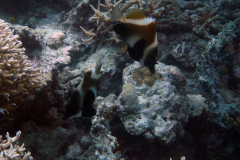 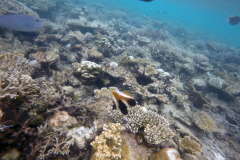