The Apogon imberbis is a small fish classified within the class Actinopterygii, the order Perciformes and the family Apogonidae. It is found from shallow waters up to 200 meters deep, both in the Mediterranean Sea and in the eastern Atlantic Ocean, from the coasts of Morocco to the north of Angola, being present in between in the Madeira Islands, the islands of Cabo Verte, Sao Tomé, Principe Islands and Annobón Island. It mainly inhabits rocky coasts with caves and fissures, searching in winter for deeper waters.

The Apogon imberbis is a fish that rarely exceeds 15 cm in length. It has a large head with large eyes and a wide mouth that is directed towards the top of the head. It has two separate dorsal fins. Of uniform red-orange coloration, its black eyes with two white longitudinal lines stand out. At the base of the tail may sometimes have a small black spot.

At night Apogon imberbis leaves its shelters to hunt for zooplankton, small invertebrates such as crustaceans and annelids, and sometimes small fish. During the day, this species remains sheltered in crevices and rocky hollows, either alone or in small groups.

The reproduction of Apogon imberbis occurs during the months of June to October, with a peak during the month of August. The specimens reach sexual maturity at approximately one year of life or about 5.5 cm in length. During the reproductive season, and after a courtship ritual, the females lay the eggs that the males fertilize. These eggs adhere to each other to form a small spherical mass, which the male introduces into his dilatable mouth cavity to incubate them. Throughout this incubation process, which usually lasts about a week, the male will not feed but will only take care of the eggs and will constantly pass water to oxygenate the clutch. After the week of incubation, the fry hatch and begin their free life. The life expectancy of this species has been estimated at 5 years for both males and females. 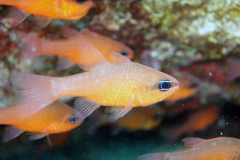 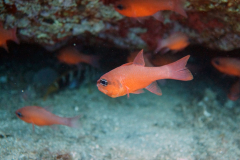