Parablennius pilicornis is a species of fish belonging to the family Blenniidae that lives on both the eastern and western shores of the Atlantic Ocean. In the eastern Atlantic, it is present from the waters of Spain and Portugal to Namibua and South Africa. On the west coast of the Atlantic Ocean, it is present in Brazil and Argentina. It is also present in the western Mediterranean Sea. The bathymetric range of this species is rather shallow, rarely observed below 15 meters depth. The species name derives from 3 Greek terms; 'para' meaning 'beside', 'blennios' meaning 'mucus' and finally 'pilicornis' meaning 'horns of hairs'.

The body of Parablennius pilicornis is elongated and somewhat laterally compressed, especially as it runs its body. They can reach sizes up to 13 cm in length. One of the characteristics that differentiate this species from others in the family is the presence of short supraorbital appendages that form bundles of filaments that resemble an eyebrow, hence the specific epithet pilicornis. The head is characterized by large eyes located in the upper lateral part, which are very mobile. The mouth is located in a lower position and has thick lips. The skin of Parablennius pilicornis, as in other blennids, is naked, so it lacks scales. Instead they secrete a mucous substance that makes them very slippery to the touch, a fact that has given them the common name of slugs.

The dorsal fin of Parablennius pilicornis is formed by 12 spines followed by a region with soft rays. There is no apparent indentation or notching between the two parts of the dorsal fin. The pectoral fins consist of 14 rays; and the pelvic fins are located just below or in front of the pectoral fins. These pelvic fins are modified to allow them to settle on the substrate. As for the coloration of the species, this can be variable, having been described several liveries very different from each other, and that can probably cause some confusion. The coloration is brown or beige with dark brown spots along the entire body, which may join together to form longitudinal bands, or in some individuals between 7 and 8 transverse bands. The other known livery is completely bright golden yellow, and although this livery is rather rare, it is extremely striking. Generally, Parablennius pilicornis does not have any kind of spot at the origin of the dorsal fin, although it may present a bluish spot in the case of specimens with dark livery, or slightly dark in specimens with yellow livery.

Not having a swim bladder, Parablennius pilicornis moves along the bottom swimming in jumps. When the specimen is at rest, it rests on the substrate by means of the pectoral fins. It is a rather territorial species, which will defend its small territory, usually formed by a crack or crevice in the rock and a small area around it.

The diet of Parablennius pilicornis consists of small invertebrates, algae and sponges.

As for reproduction, Parablennius pilicornis is a viviparous species and therefore the larvae develop inside the eggs, which are laid by the parents during the months of May to July, adhering them inside their nest by means of a filamentous adhesive pad. The male specimens are the ones that will take care of and oxygenate the clutch, which is why during this time they are quite territorial, and threaten with yawns anyone who dares to approach their territory. After a month of laying, the larvae hatch and become part of the plankton until they reach about 15 mm in length, when they descend to the bottom as juveniles. It has been described that certain males during the reproductive season adopt a third livery, with the whole body dark blue almost black. The life expectancy of the species is estimated to be between 2 and 3 years. 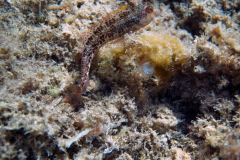 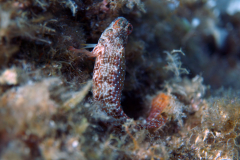