Parablennius rouxi is a species of the family Blenniidae found mainly in the Mediterranean Sea, and occasionally on the Spanish and Portuguese coasts of the Atlantic Ocean. It always lives on rocky bottoms at depths between the surface and 40 meters.

The body of Parablennius rouxi is elongated and slender, somewhat compressed laterally and with a blunt head. Its body rarely exceeds 6 cm in length. On its head, its large eyes stand out, located in a lateral upper position. Behind the eyes, we find thin and forked supraocular tentacles. Additionally, a second set of much smaller tentacles are present just above the nasal openings. It has a single dorsal fin formed by 12 spines followed by a region of soft rays. Both the spiny and soft ray regions are of more or less similar height, and lack a notch or indentation between them. The pectoral fins are made up of 14 rays. The skin of Parablennius rouxi, as in other blennids, is naked, so it lacks scales. Instead they secrete a mucous substance that makes them very slippery to the touch, a fact that has given them the common name of slugs. As for the coloration of Parablennius rouxi, this is very distinctive, being the body yellowish white with a striking black stripe with smooth edges that extends from the head to the tail, through the middle of the eyes.

Lacking a swim bladder, Parablennius rouxi moves along the bottom swimming in leaps and bounds. When the specimen is at rest, it rests on the substrate by means of the pectoral fins. It is a rather territorial species, which will defend its small territory, usually formed by a crack or crevice in the rock and a small area around it. We also highlight its curiosity, being totally calm in the presence of people, hiding occasionally when there are movements, but then coming out of the crevice to observe what has happened.

The diet of Parablennius rouxi consists of small invertebrates, algae and sponges. 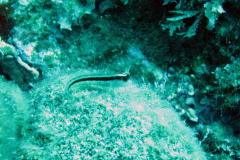 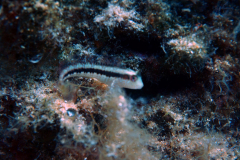