Known as the Indo-Pacific sergeant major fish, Abudefduf vaigiensis is a species belonging to the family Pomacentridae. It inhabits the tropical waters of the Indo-Pacific (South Africa, Madagascar, Red Sea, Seychelles, Mauritius, Reunion, Maldives, India, Sri Lanka, Australia, Indonesia, Micronesia, New Guinea, Palau, Philippines, Taiwan, China, and the Japanese islands of Ogaswara and Ryukyo). To the east they are found in Fiji, Samoa, Tonga, Kirbati and Tuamotu. In the southern Pacific Ocean, they are found in the Great Barrier Reef, New Caledonia and New Zealand. Occasionally, specimens of this species have been found in the Mediterranean Sea. Its presence in the Mediterranean is thought to be anecdotal and due to the Suez Canal. Abudefduf vaigiensis inhabits lagoons and reef areas, although they can also be found in coastal rocky areas and harbors, always at depths greater than 15 meters.

Abudefduf vaigiensis is a small fish, usually not exceeding 15 cm in total length. Its body is flattened laterally and is relatively tall and oval in shape. The mouth is terminally positioned, small in size and has numerous very small teeth. As for its fins, the dorsal fin is unique and consists of 13 spiny rays and 12-13 soft rays. The anal fin has 2 spiny rays and 11-13 soft rays. The ventral fins have a pointed shape, while the pectoral fins are rather broad. The pectoral fins have 16-20 soft rays. Finally, the caudal fin has two distinct lobes, so it is bifurcated. The base color of the body is silver, with the dorsal area yellowish. Five dark bluish vertical stripes stand out.

The juvenile specimens of Abudefduf vaigiensis, feed primarily on plankton, while the diet of adult specimens is much more varied and we find from algae, crustaceans, gastropods, ascidians, annelids, jellyfish and sometimes small fish.

The male specimens of Abudefduf vaigiensis are polygamous and very territorial. Reproduction of this species usually occurs on days of high tide, which facilitates the dispersal of offspring. The male is in charge of cleaning a rocky surface, to which he attracts a female by means of a dance. Once the female is attracted and the eggs are laid, the male will make sure that the eggs have enough current until hatching, using his fins to move the water. 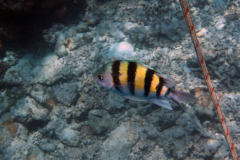 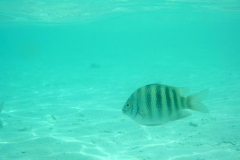 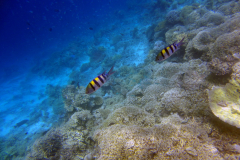 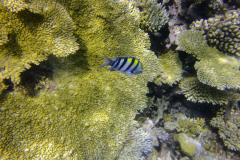