Within the Pomacentridae family or also known as the family of damselfishes & clownfishes we find Chromis atripectoralis, one of the 387 species currently existing in this family, which is organized within 4 subfamilies and a total of 29 different genera. We find this species in the waters of the Indian Ocean and in the South Pacific Ocean, from the coasts of East Africa to French Polynesia, south of Japan. It inhabits coral reefs, among the branching colonies of corals, usually in shallow waters (less than 20-30 meters).

Both the head and flanks of Chromis atripectoralis are greenish-blue, while the belly is whitish to grayish.

The diet of Chromis atripectoralis is based on the capture during daylight hours of small crustaceans such as copeopods, amphipods.

Chromis atripectoralis is an oviparous species, which lays its eggs in the water column, where fertilization occurs and eggs are formed. Subsequently, larvae hatch from the eggs and become part of the plankton. 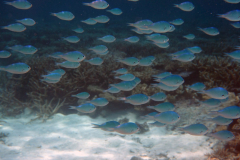 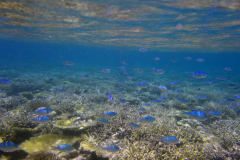 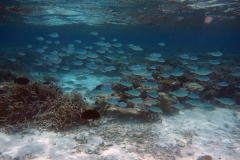