Known as Mediterranean chromis, Chromis chromis is a small fish (usually not more than 15 cm) with a laterally compressed body, with a small head, mouth in terminal position and a very forked caudal fin.

Chromis chromis is probably one of the most common fish in the Mediterranean. It is common for them to form, in coastal waters, more or less dispersed schools of hundreds if not thousands of specimens, moving in unison in the face of possible dangers.

The adult specimens have a dark brown shade with the edges of the scales in black, although when observed from a distance they appear to be completely black. On the contrary, the juvenile specimens have one of the most striking colorations of the Mediterranean, an iridescent cobalt blue color, which calls powerfully the attention.

The reproduction period of this species includes the summer months. During this time, the male specimens defend with unusual ferocity small territories in the rocky walls against other specimens of the same species. In the center of these territories, they conscientiously clean the rock of algae. Later, they perform a dance in order to attract possible female specimens. This dance consists of swimming towards the water column, to later carry out a fast movement towards their territory, indicating this way to the females the availability of the place prepared for the laying. Once the laying has occurred, the male is in charge of giving all possible care to the offspring. The fry hatch within a week of laying, at which time they move to slits or sea grasses where they obtain shelter and protection from predators. Recently it has been described that the young specimens seek the transitory protection of the Anemonia sulcata and/or other species of cnidarians. 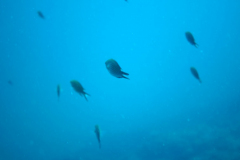 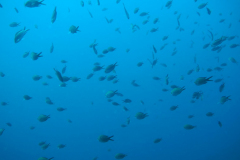 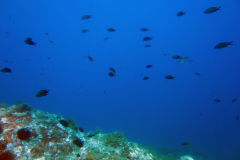