Within the Pomacentridae family or also known as the family of damselfishes & clownfishes we find Dascyllus aruanus, one of the 387 species currently existing in this family, which is organized within 4 subfamilies and a total of 29 different genera. This damselfish species lives among the branches of reef corals, especially branches of Acroporas from the shallow tropical waters (less than 12 meters) of the Indian and Pacific Oceans, from the coasts of East Africa, to the Line Islands and southeastern Polynesia, and northward to southern Japan.

The body of Dascyllus aruanus is usually about 6-7 cm long, with the maximum recorded length being 10 cm. The body is circular to slightly oval, very tall and laterally compressed, with the dorsal and ventral profiles of the head very convex. The snout is very short and bluntly shaped. Compared to the size of the body, its mouth is small, and is provided with thick lips. The edges of the preoperculum are finely serrated. The dorsal fin has 12 spines and 11-13 soft rays, while the anal fin has 2 spines and 11-13 soft rays. The pectoral fins have 17-19 rays, and the caudal fin shape is bifurcated, with the upper and lower edges of the fin base having 2-3 short and spiny rays.

The coloration of Dascyllus aruanus is very colorful because of the contrast between the whitish body color and 3 vertical black stripes. The first one starts at the base of the mouth and runs diagonally across the eye area until it reaches the first rays of the dorsal fin. The second stripe runs from about the middle of the dorsal fin, passing behind the pectoral fins, until it reaches the ventral fins. Finally, the third stripe starts at the back of the dorsal fin and runs just before the peduncle to the anal fin. The pectoral fins are translucent, while the pelvic fins are black with electric blue anterior edges.

Dascyllus aruanus forms aggregations of about a dozen specimens around coral colonies, especially those of the genus Acropora and Pocillopora. During the day, it is placed slightly above these coral branches, but not too far away from them, because at the slightest danger all the specimens of the colony will seek the shelter provided by the sharp calcareous branches to protect themselves from possible predators.

The diet of Dascyllus aruanus is based mainly on zooplankton, as well as small benthic invertebrates and occasionally some algae.

Dascyllus aruanus is a protogynous hermaphrodite species, meaning that females can transform into males. During the reproductive season, the dominant male of the colony will carefully prepare a nest on the bottom, in which the female will lay her eggs during the first hours of dawn, and which the male will quickly fertilize. After 3 days in which the male will be in charge of aerating the clutch with gentle movements of his fins, the eggs hatch usually during the last hours of the day, and the currents disperse the larvae. 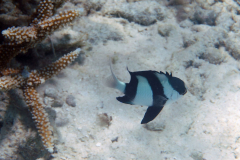 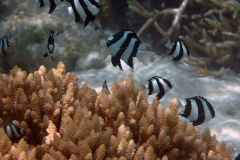 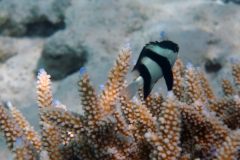 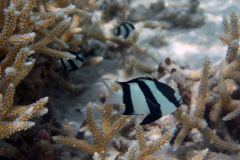 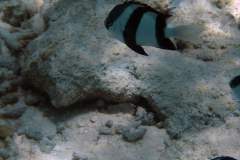 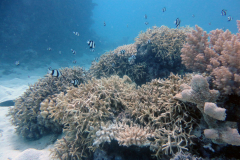 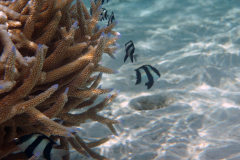 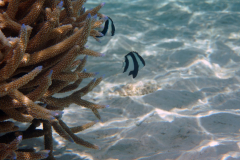 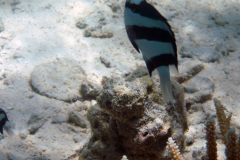 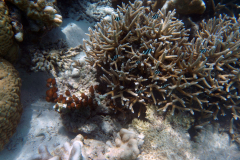 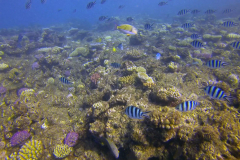 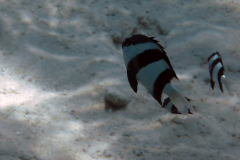 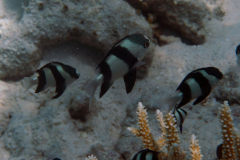