Within the Pomacentridae family or also known as the family of damselfishes & clownfishes we find Premnas biaculeatus, one of the 387 species currently existing in this family, which is organized into 4 subfamilies and a total of 29 different genera. It is the only species of clownfish that does not belong to the genus Amphiprion, being at the same time the only species of the genus Premnas. It lives in the lagoons of protected waters of coral reefs in waters up to 15 meters deep in the Indian and Pacific Oceans, from the coasts of India and Indonesia, to the Solomon Islands, Australia, Philippines, Andaman, Malaysia, Micronesia, New Caledonia, Papua New Guinea, Solomon Islands, Thailand, Vanuatu and Vietnam.

Both the body and fins of Premnas biaculeatus are of an intense red color, more vivid in males and juveniles, and with a more brownish tone and closer to black in females. Along the body there are 3 thin vertical stripes, the first one behind the eyes, the second one at the level of the dorsal fin notch, and the third one on the caudal peduncle. These fine stripes can be white in some specimens, or golden-yellow in others.

It is usually a monogamous species, living together with its partner in anemone specimens (Entacmaea quadricolor or Macrodactyla doreensis) establishing a mutualistic relationship.

The diet of Premnas biaculeatus is based mainly on zooplankton and benthic algae.

Although in appearance males and females have the same chromatic pattern, sexual dimorphism is given by their size as previously mentioned. Premnas biaculeatus is a protandric hermaphrodite species, so all specimens are born with the male sex, and larger and/or dominant specimens may become females. They reproduce mainly during the spring and summer months. The female attaches the eggs to the substrate, where they are fertilized and cared for by the male. A week after fertilization, the eggs hatch and the larvae are released. The life expectancy of this species is between 6 and 10 years. 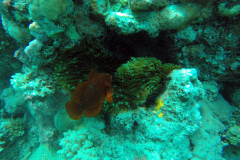