Belonging to the Sciaenidae family, Sciaena umbra is a species present throughout the Mediterranean Sea, including the Black Sea. In the eastern Atlantic it is found from the southern coasts of England to the Senegalese, Madeira, Canary and Cape Verde coasts. It lives in shallow waters between 8 and 20 meters during the summer season, moving to greater depths (up to 200m) during the winter months. They usually inhabit sandy bottoms, especially Posidonia oceanica meadows, as well as rocky bottoms. It is common to observe schools of specimens in dark caves.

Sciaena umbra can reach a total length of approximately 70 cm. Its body has a profile with a very curved back and a ventral part that is practically flat. The mouth is terminal and its jaws are slightly rounded. The jaws have 3 to 4 rows of teeth on each jaw. A distinctive feature of other species of the same family is that they lack barbels under their jaws. The eyes are relatively large in relation to their body size. Continuing backwards, we find the operculum, in which they present two spines. From the operculum to the peduncle of the caudal fin, there is a clearly visible lateral line that runs parallel to the contour of the back.

Entering the section on the fins of Sciaena umbra, it has two dorsal fins that are contiguous. The first one is formed by 10 spiny rays, while the second one has 1 spiny ray followed by 23 to 25 soft rays. The anal fin has two spines and 7-8 soft rays, the fin being black except for the spiny rays which are white. The same is true for the ventral fins, which are formed by a white spiny ray followed by 5 black soft rays. The pectoral fins are smaller than the ventral fins. Finally, the caudal fin has a truncated shape. As for the coloration of its body, the main color is tan brown with golden reflections predominantly in the most dorsal part, as well as dorsal and caudal fins.

Sciaena umbra is a very active species during the night, while during the day it is common to find it hiding in caves or rocky nooks and crannies. Its diet consists mainly of small fish and crustaceans, occasionally supplemented with some algae.

The reproduction of this species occurs when they reach sexual maturity, which occurs approximately when they reach a size of 25 cm in length. They reproduce once a year, during the summer months. Their life expectancy is relatively long compared to other fish, as they can live up to 20 years. 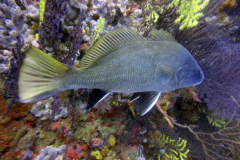