Monotaxis grandoculis is a fish belonging to the family emperor breams (Lethrinidae) that inhabits the coral regions of reefs, and often the peripheries of these in sandy areas. We find this species between 3 and 60 meters depth, although above 30 meters depth is where they are more frequent. The geographic range of the species is very wide, covering both the Indian and Pacific oceans, from Hawaii to the southwest of Oceania, and from the east coast of Africa to the Red Sea, and from Australia to Japan.

The body of Monotaxis grandoculis is oval and laterally compressed. They reach sizes up to 60 cm in total length, with 40 cm being the most common length. The cephalic profile is markedly convex, especially in the area next to the eyes. The eyes are very large, with a large interorbital space. The jaws are equipped with 6 canine teeth, followed by two patches of small villiform teeth, and between 6 or 7 molars on each side of both jaws. The dorsal fin is unique and is formed by 1 slender spine whose length is half the length of the 10 soft rays that follow it. The anal fin is formed by 3 spines and 9 soft rays. The caudal fin is forked with the lobes ending in a point.

As for the color of Monotaxis grandoculis, it is bluish-gray on the dorsal side that becomes whitish as we move to the ventral side. The lips are yellowish to pinkish. Also noteworthy is the region around the eyes, which is often yellowish-orange. The fins do not usually have distinctive patterns, and the membranes may be light, brownish, reddish or yellowish-orange. The upper and lateral base of the pectoral fins have a black spot. As for the caudal fin, its rays are blackish and contrast with the pale color of the interradial membranes. Juvenile specimens of Monotaxis grandoculis are whitish on the lower half of the body, with 3 prominent black bands that are separated by narrower white bars. One of these black bars crosses the eye. Fins are light colored except for the dorsal fin which includes the continuation of 2 of the 3 black bars on the upper dorsal flanks. Also, the outer edges of the caudal fin lobes are yellow-brown. The juvenile coloration pattern may occur in relatively large specimens, up to 20-30 cm in length. Adults, although lacking black bars on the body, can quickly adopt them if they feel in danger.

Although it is possible to find solitary individuals of Monotaxis grandoculis, they usually form groups of up to 50 individuals.

The diet of Monotaxis grandoculis is based on gastropod molluscs, brittle stars, echinoids, but also certain crustaceans, polychaetes, tunicates and holothurids. 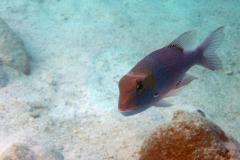 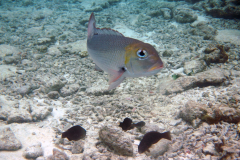