The yellow and blue-back fusilier or Caesio teres is a fish classified in the class Actinopterygii, order perciformes and family Caesionidae. It is a widely distributed species and common in all tropical regions of the Indian and Pacific Oceans, from the African coasts (except the Red Sea and the Persian Gulf) to the Line Islands (Kiribati). It inhabits the waters near coral reefs, with a preference for coral lagoons.

Caesio teres is a gregarious fish, usually found in large schools of individuals in coral lagoons. It is common to observe specimens of Caesio teres grouped with other species of fusiliers such as Caesio xantonota. It is a species that moves quickly, covering large areas between reefs where it feeds on zooplankton.

The reproduction of Caesio teres always coincides with the full moon, when large groups of specimens gather to spawn together. After fertilization, the eggs become part of the plankton for a short period. These eggs are spherical and completely translucent, lacking any pigmentation. After a few days, the fry hatch and are dispersed by the action of currents. 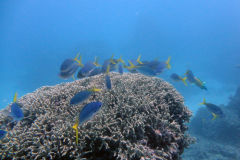 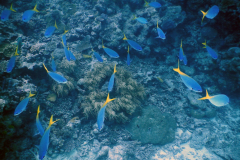 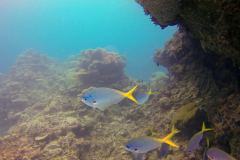 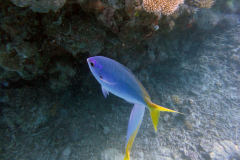