The red mullet or Mullus surmuletus is a species classified in the class Actinopterygii, order Perciformes and family Mullidae. It is a species that inhabits the sandy and/or muddy bottoms of coastal waters to depths of up to 300 meters. It is distributed both in the waters of the Atlantic Ocean from the North Sea to the coasts of Senegal; as well as the entire Mediterranean Sea and the Black Sea.

The body of Mullus surmuletus is moderately elongated (length 3.5-4.3 times the maximum body height) and slightly laterally compressed. They can reach sizes up to 40 cm in length, although specimens of 10-20 cm are common. The face is not very pronounced, and has a small mouth located in the lower part. The maxillary commissure does not reach the anterior vertical of the eye. Its jaws have teeth only in the lower jaw, being these of small size. On the chin, it has a pair of long tactile appendages that are usually longer than the pectoral fins themselves. These appendages of Mullus surmuletus can be hideed in a pair of grooves present under its chin. If we move away from the cephalic region, we find the operculum that lack spines. It has two dorsal fins, the first formed by 8 spines (rarely 9) of which the first is very small in size. The second dorsal fin is formed by 1 spine followed by 7-8 soft rays. The anal fin has 1 spine and 7-8 soft rays, while the pectoral fins have 15-17 soft rays.

When we observe Mullus surmuletus, we will generally do it forming small groups of individuals that will be quietly searching through the sand for their food thanks to their barbels, or on the contrary we will see them resting on the sand. The diet of this species consists of invertebrates, crustaceans, molluscs and worms. When their barbels detect their prey, they bury a large part of their snout to dig up and ingest their prey.

The breeding season of Mullus surmuletus occurs in the late winter months, and can last until early summer. 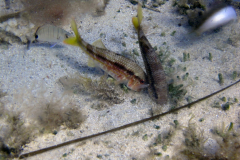 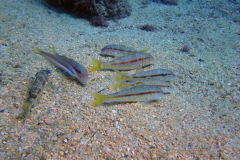 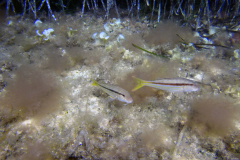 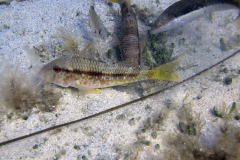 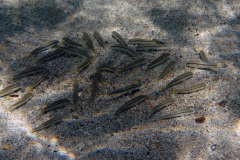 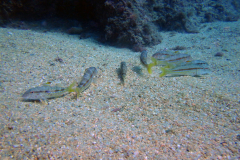