Parupeneus barberinus is a species of the family Mullidae, classified in the order Perciformes and class Actinopterygii. This species is usually found in the sandy plains of the coral reefs of the Indian and Pacific Oceans.

It is a species that does not lend itself to confusion in its identification. Its body can reach up to 40 cm in total length, although it is common to observe specimens of about 30 cm. It has an elongated snout, with a slightly lower terminal mouth, in which there are two long barbels that reach and exceed the posterior vertical of the height of the eye. It has two dorsal fins, the first formed by 8 spines, and the second formed by 1 spine and 6 soft rays. The anal fin is formed by 1 spine and 6 soft rays. The pectoral fins usually have 16-18 soft rays and end somewhat pointed. As for the coloration of Parupeneus barberinus, it is pale brown to reddish-brown on the dorsal part, which becomes whitish on the lower sides and belly. From the snout, across the eye and reaching the back of the second dorsal fin, runs a reddish-brownish-blackish stripe. Above this stripe, the coloration is yellowish, below, and as we approach the ventral part of the specimen, reddish tones begin to appear, beeing more evident at the base of the pectoral fins. Another characteristic feature of this species is the presence of a large circular spot located in the center of the caudal peduncle, and whose size is larger than the specimen's own eye.

The larger individuals of Parupeneus barberinus are generally solitary, although they may be accompanied by some specimens of certain species of wrasses, which take advantage to capture unnoticed prey when moving the seabed thanks to their barbels in search of food. The barbels of Parupeneus barberinus are extremely sensitive, and it uses them to feel the seafloor in search of prey. Once located, it buries its entire snout in the sand to capture the benthic crustaceans and invertebrates on which it feeds. 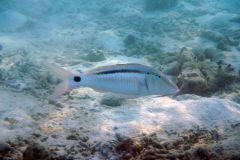 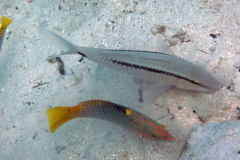 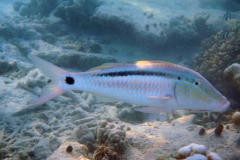 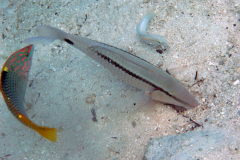 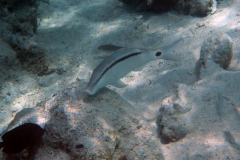