Gobius auratus is a species classified within the class Actinopterygii, the order perciformes and the family Gobiidae. This goby is endemic to the Mediterranean Sea, and is usually found solitary, living on rocky substrates covered by algae at depths between 5 and 80 meters, although they are usually more frequent above 30 meters deep.

The intense yellow coloration of Gobius auratus, together with its small size (rarely exceeds 8-10 cm in total length), makes this species not present to difficulties of identification among the other gobies present in the Mediterranean Sea. Two large greenish-black eyes stand out on its head. It has a pair of small dark spots on the cheeks, as well as a larger one on the upper part of the pectoral fins. It has two separate dorsal fins, the first one somewhat smaller and with spiny rays, while the second dorsal fin is formed by soft rays and runs practically the posterior two thirds of the back of Gobius auratus. The anal fin runs practically along the posterior two thirds of the body and is dominated by soft rays compared to the few spines found on the first rays.

This species inhabits on rocky bottoms with a significant presence of ground cover algae, in which it finds its food: small crustaceans such as copepods or water fleas, as well as annelids or gastropods.

We will find individuals of Gobius auratus living solitarily or forming small groups, and they are usually rather shy individuals, taking refuge in small cavities or crevices at the slightest disturbance.

The breeding season of this species includes the months of April to May, during which the females lay their eggs in the shelters of the males. From that moment on, the males will be in charge of the surveillance and care of the eggs until the hatching of the fry. 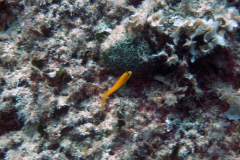 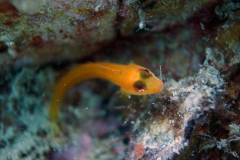