Gobius bucchichi is a fish of the Gobiidae family within the order of perciformes. It is a benthic species found in coastal waters less than 30 meters deep and usually on rocky and sandy bottoms. It is distributed throughout the Mediterranean Sea and part of the Atlantic Ocean, from the coasts of Morocco, Spain and Portugal.

The body of the males of Gobius bucchichi can reach 10 cm in length, being the length of the females somewhat smaller. Its body is cylindrical and compresses laterally as we move towards the back of the body. The head is robust and broad, with the eyes large in relation to the head and set laterally at the top of the head. In a position within the rostrum anterior to the eyes, we find the nostrils adorned with small membranous folds in the manner of small tentacles. At the terminal position of the snout, we find the circular mouth. As for the fins of Gobius bucchichi, it has two dorsal fins, the first formed by 6 spines and the second formed by a spine and 13-14 soft rays. The anal fin, of similar length to the second dorsal fin, has 1 spine and 12-14 soft rays. The pelvic fins are fused together to form a disk on the ventral part of the body. Finally, the caudal fin is rounded. The coloration of the body is based on light brown and gray, with yellowish spots, and a large black spot located at the base of the pectoral fins. It also presents a black stripe in the eye region.

Gobius bucchichi is the only fish species in the Mediterranean Sea capable of establishing a partnership with the anemone Anemonia sulcata.

Among the preferred prey on which Gobius bucchichi feeds, we find small crustaceans, molluscs, polychaetes and algae. 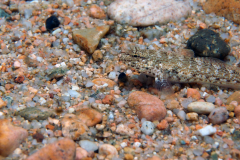