Gobius geniporus is a perciform belonging to the family of gobies (Gobiidae). It is a species endemic to the Mediterranean Sea, with benthic habits and predominantly inhabiting sandy bottoms between 5 and 30 meters deep, although it is also possible to find specimens of this species in Posidonia oceanica meadows.

The body of Gobius geniporus is elongated and practically cylindrical in the anterior part, compressing laterally in the posterior part. It can reach sizes up to 16 cm. The head is large and elongated, with a rounded anterior profile. The head has a large mouth with thick lips, as well as large and prominent eyes. We also find on the head the nostrils that have small fleshy tentacles. It has two dorsal fins, both close to each other. The first is formed by 7 spines and has a rounded shape in females and in males it has elongated spines as filaments. The second dorsal fin is formed by 1 spine and 12-14 soft rays. The anal fin has 1 spine and 11-12 soft rays, and the pectoral fins are formed by 17-19 rays.

The coloration of Gobius geniporus is light brown with dark rectangular spots alternating with lighter spots. It also has an irregularly shaped dark spot just below the eyes, a feature that allows differentiating this species from others of the same family.

As for the behavior of Gobius geniporus, it is a solitary and quite territorial species, however, it usually relies on the mimicry of its color with the sandy bottom, so it waits until we are already very close to it to take shelter in a nearby hiding place.

Like most gobies, they usually rest on the ground without moving, where they hunt small crustaceans and invertebrates. Reproduction occurs between April and June, when males change their coloration to darker shades.

There may be confusion when identifying Gobius geniporus with the species Gobius niger and Gobius fallax. 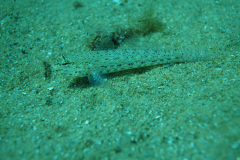 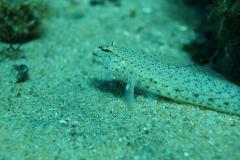 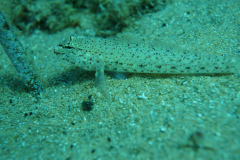