Haemulon sciurus belongs to the family of grunts (Haemulidae), a family of fishes consisting of 2 subfamilies in which there are 19 different genera grouping 133 different species. It inhabits the subtropical waters of the western Atlantic Ocean, from the coasts of Florida to Brazil, including the entire Gulf of Mexico and the Caribbean Sea. It has a preference for shallow waters at maximum depths of up to 40 meters. It is a very common species in the mangroves, reefs and grasslands of the western Atlantic Ocean.

Haemulon sciurus has a yellow body with thin blue horizontal lines. The lower line closest to the eye adopts an arc shape characteristic of this species. The dorsal fin is black with yellow trim, while the anal and pectoral fins are yellow. Juveniles less than 2 cm in length have a melanophore spot on the caudal peduncle, that is to say a spot that can change color between black and brown. As the juvenile grows, so do these spots, which cover from just behind the eyes to the caudal peduncle. When the specimen reaches 5 cm in length, it loses this juvenile coloration and begins to make the changes to adopt the adult coloration.

Adults of this species are found in relatively numerous schools in rocky areas or on corals, where there may also be individuals of the species Haemulon flavolineatum. Juveniles frequent the meadows, especially those of the alga Thalassia testudinum. Its diet consists mainly of crustaceans, although it also feeds on annelids, bivalves and even small fish. Mainly during the night is when this species is most active.

Little is known about the reproduction of Haemulon sciurus. It is known that reproduction occurs between January and April in the Caribbean Sea, and after fertilization the larvae live planktonically for a short period of time and then descend to the bottom of the seagrass beds to undergo the metamorphosis that will turn them into juveniles. 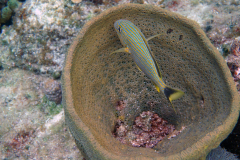