Plectorhinchus picus belongs to the family of grunts (Haemulidae), a family of fishes made up of 2 subfamilies in which there are 19 different genera grouping 133 different species. It is a species native to the waters of the Indian and Pacific Oceans, where it is found from the east coast of Africa to the Great Barrier Reef, and from southern Japan to the east of the Society and Rapa Islands. It prefers coastal waters and near reefs, lagoons and sea meadows, where this species will look for caves and coral overhangs to find shelter during the day.

Juveniles are creamy white ventrally and blackish dorsally. They have a whitish snout and a pair of white spots on the dorsal side. However, adult specimens of Plectorhinchus picus are covered with brown spots on the head, flanks and fins. The dorsal fin is dark brown to blackish, with a mid-horizontal gray stripe, numerous black circular spots, and usually with a black fin margin. The pelvic and pectoral fins have red-orange bases and axils in some specimens, and also noteworthy is the red-orange color of the inside of the mouth.

Juveniles are usually found in shallow lagoons. Adults, during the day congregate in large groups to rest, and during the night they disperse individually in search of their preferred prey, among which we find mainly molluscs, crustaceans and occasionally small fish. 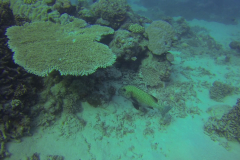 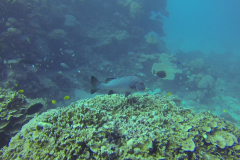