Paracirrhites forsteri, also known as blackside hawkfish, is a species of hawkfishes classified in the class Actinopterygii, order perciformes and family Cirrhitidae. It is a fairly common species in the coral reefs of the Indian and Pacific Oceans. In the Indian Ocean it is present in all its tropical and subtropical islands, from the Red Sea to the South African province of Natar, in the east of the country. In the Pacific Ocean, from southeastern Japan to southeastern Australia (New South Wales), and the eastern islands of Oceania, including Hawaii and the Pitcairn Islands.

The body of Paracirrhites forsteri is relatively long, with a length between 2.6 and 2.8 times its maximum body height, reaching a maximum of 22 cm, although individuals of 18 cm in total length are usually observed. It has a short snout with a large mouth, whose mandibular fissures reach the vertical formed by the central part of the eye. Continuing in the cephalic region, behind the eyes we find the preoperculum whose edges are finely serrated. As for the fins of Paracirrhites forsteri, the dorsal fin is unique and continuous, being formed by 10 spines and 11 soft rays. Between the spines and the soft rays there is a notch, without completely separating the two regions. Each of the spines of the dorsal fin has a thin membranous filament at the top. If we continue with the anal fin, we will observe that it is formed by 3 spines and 6 soft rays. The pectoral fins have 14 rays, with the lower 7 lacking branches and thicker than the uppermost rays. The caudal fin is slightly rounded.

As for the coloration of this species, the base color is predominantly yellow, with a faint dark central longitudinal band. In the upper part of the back, there is a wide black band that runs from the middle region of the dorsal fin to the middle of the caudal peduncle. Below this black band, the color is yellowish. Also on the head, nape and thorax, there are numerous small circular reddish-brown spots.

It is common to observe specimens of Paracirrhites forsteri resting quietly on the corals, a position from which they have a privileged view of the reef, and through which they can effectively locate their prey, small fish. 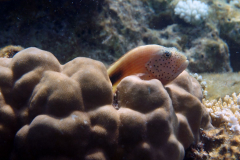 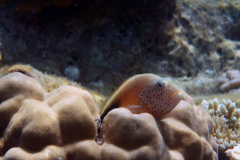 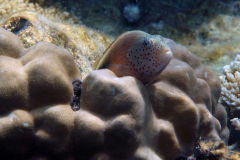