Carranx lugubris is a species belonging to the Carangidae family, which is easily identified due to its characteristic black fins, as well as its fins and dorsal keel. It is a species that is not usually present in shallow waters, but prefers waters between 24 and 65 meters deep. It is a circumtropical species that is widespread in the insular habitats of the oceans.

The body shape of Caranx lugubris is oval, with a tall body and moderately compressed on the lateral axis, which can measure up to 90 cm in length and weigh up to 7 kg. The dorsal profile of the head is very convex, while the ventral profile is practically flat. It has relatively large eyes and also a large mouth whose mandibular commissure reaches the vertical formed by the center of the eye. The jaws are extensible, and the upper jaw has an outermost row of canine teeth, surrounded by an inner band of small teeth. The lower jaw has only a single row of canine teeth, with the first pair of lateral canines being larger than the rest. It has two dorsal fins, the first consisting of 8 spines, while the second consists of one spine and 20-23 soft rays. The first rays of the second dorsal fin, as with the anal fin, are much longer than the subsequent ones. The anal fin is formed by 3 spines, of which the first two are independent, followed by 17-20 soft rays. As for the pectoral fins, these are long and have the upper rays much longer than the lower ones. On the flanks of Caranx lugubris there is a lateral line with a large curvature in the anterior part, which then descends to the height of the middle of the body, to continue straight and become 26-32 lateral scutes that run to the base of the forked caudal fin. The body of this species is dark grayish-brownish with the fins distally black and the lateral scutes also black. It also has a small black spot at the top of the opercular opening.

Carranx lugubris is a predatory species of other fish, as well as crustaceans and molluscs, which can be found solitary or in small groups. 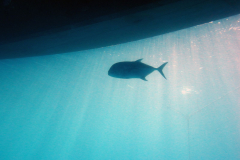