Trachinotus blochii is a species belonging to the family Carangidae, and subsequently to the order Carangiformes. This species is found in coastal waters associated with reefs and rocky areas of the Indo-Pacific, from the coasts of Japan to northern Australia, and eastward to Samoa, Tonga and the Marshall Islands. It generally inhabits waters between 10 and 50 meters deep.

The body of Trachinotus blochii is deep, oval-shaped in juveniles and sub-oval in adults, and laterally compressed. They can grow to sizes up to 65 cm in total length. The cephalic profile of this species is rounded, with a blunt snout. The upper jaw reaches the vertical formed by the anterior part of the eye. Both jaws are equipped with small teeth in juveniles, which are lost as they become adults. The dorsal fin is located in the posterior third of the body of the specimen, and has the first rays much longer than the rest. The dorsal fin reaches the beginning of the caudal peduncle. The same happens with the anal fin, located in the posterior third and with the first rays very elongated, and the remaining shorter ones reach the base of the caudal peduncle. The pectoral fins are short, with the upper rays longer than the lower ones.

Trachinotus blochii is a pelagic species, that is to say they live in mid-water or near the surface. Their diet consists mainly of crustaceans (especially hermit crabs) and occasionally molluscs. In both cases, they are able to crush the shells of their prey thanks to their strong pharyngeal plates.

Generally, adult specimens of Trachinotus blochii are usually observed solitary in the deep waters of reefs. In contrast, juveniles of this species usually swim in small schools in very shallow waters close to beaches. 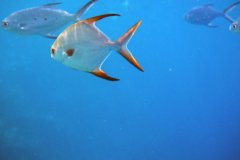 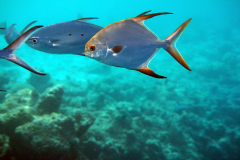 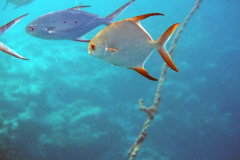 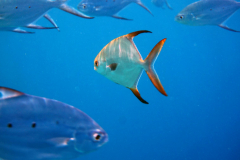