Cetoscarus bicolor is one of the 2 members of the genus Cetoscarus, which together with 9 additional genera make up the parrotfishes family (Scaridae) in which a total of 99 species are currently described. This species is distributed over a wide region of the Indian and Pacific Oceans from the Red Sea to the Tuamotu Islands, the Izu Islands and the southern Great Barrier Reef. It is associated with coral reefs and their lagoons, where it can be found at depths of up to 30 meters.

Cetoscarus bicolor is one of the largest parrotfishes species, reaching up to 50 cm in total length and up to 1.5 kg in weight. Its body is oval, elongated and laterally compressed. Its mouth with large teeth fused together, although distinguishable, stands out.

This is a species in which there are very drastic coloration changes between the different phases through which the specimens pass. Juveniles are white, with an orange-reddish stripe on the posterior half of the head, which includes the entire eye and eye socket. This orange stripe may have irregularly delimited black edges. Also noteworthy in juveniles is a black ocellar spot on the anterior part of the dorsal fin, surrounded by another yellow-orange spot.

As with many other species of this genus, Cetoscarus bicolor is a sequential hermaphrodite species. That is, individuals begin life as females and then change to males. Females acquire a pattern known as the initial phase in which the body is dark brown-green-grayish with the edges of the large scales of its body bordered in black. There is a large horizontal yellowish-cream colored spot on the upper part of the body. The eyes are orange, and from the junction between the upper and lower jaw, and towards the pectoral fins and the ventral area of the same, the coloration tends towards a whitish tone. The dorsal, anal and caudal fins have a certain reddish tone. On the contrary, the males acquire a pattern known as terminal phase in which their great coloring stands out. The dominant color of the body of the males is green, with the edges of the scales of pink color, as well as numerous small circular spots also of pink color from the face to the middle of the body of the specimen. These circular spots are denser and smaller on the part of the body behind the eyes to past the vertical of the pectoral fins. On the rostrum, in front of the eyes, the spots are more spaced out. From the junction between the upper and lower jaw, there is a pink line that runs under the pectoral fins to the beginning of the anal fin. Below this thin pink stripe, the color is smooth green, with some sporadic and isolated pink spots. The dorsal and anal fins of the males have pink bases, while the outermost part is green. The pectoral fins are blackish, and the caudal fin has the upper and lower edges in pink, with an arched stripe that joins them also pink, behind which there is a crescent-shaped spot of blue, and then have the outer margins of pink.

Generally Cetoscarus bicolor usually forms small groups formed by an adult individual in the terminal phase of coloration, and two or three females. The diet of this species is based on the algae that cover the coral and rocky bottoms. During the night, Cetoscarus bicolor sheds a mucous layer that allows them to avoid giving off odors that could attract potential predators. 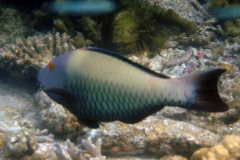 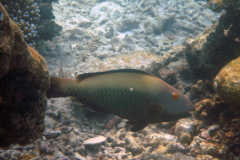 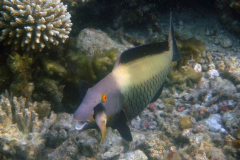