Chlorurus microrhinos is one of the 18 members of the genus Chlorurus, which together with 9 additional genera make up the parrotfishes family (Scaridae) in which a total of 99 species are currently described. It is one of the most widely distributed parrotfish species of its genus. It is present in almost all the Indian and Pacific Oceans, from the Ryukyu Islands to Indonesia, the Great Barrier Reef of Australia, New Caledonia, French Polynesia and Oceania. In terms of habitat, their preferences are not very strict, and they can be found in many different habitats, such as lagoons, coastal or oceanic reefs, always at depths of less than 50 meters.

Unlike other parrotfishes, Chlorurus microrhinos despite making color changes as they change stages, these changes are not as drastic as in other species of the genus. The body color is greenish blue with a bright blue band behind the corner of the mouth, as well as a broad blue spot along the head. Some specimens may have a uniform yellowish brown color throughout the body, although this pattern is not very common.

As with many other species of this genus, Chlorurus microrhinos is a sequential hermaphrodite species. That is, individuals begin life as females and then change to males. Generally, individuals form schools in lagoons and marine reefs rich in algal growth, where they feed on filamentous algae. This large parrotfish species has an important ecological role in coral reefs because they burrow through the coral to feed on algae as they graze. They grow rapidly and can reach an age of 15 years. They usually swim in schools of about 40 fish, although juveniles tend to be rather solitary. 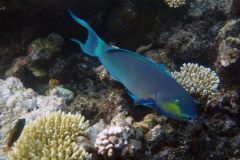 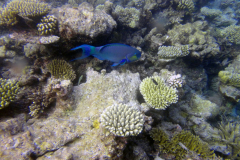