Chlorurus spilurus is one of 18 members of the genus Chlorurus, which together with 9 additional genera make up the parrotfishes family (Scaridae) in which a total of 99 species are currently described. This species occurs in the waters of the Indian and Pacific Oceans, from the Red Sea to Australia and the Cocos and Christmas Islands.

The body of Chlorurus spilurus is typical of parrotfishes, with an elongated, somewhat oval body, and with a robust beak formed by the fusion of teeth in both jaws.

Male specimens of Chlorurus spilurus are bluish to brownish green in color, with a pale belly and pale green caudal peduncle. On the back of the body they have a yellowish orange spot. The pectoral fins are green with a thin purple line. The face is purplish and often has two purplish stripes behind the eyes, as well as an orange to pinkish spot on the cheek and narrow pink lines around the mouth. Females are dark maroon-brown, with a reddish-pink snout and chin, and often two soft-colored spots along the flanks. Juveniles are dark brown, with four horizontal white stripes along their flanks. As juveniles grow, they gradually turn their body color to brown, with the anterior part of the caudal fin soft-colored. The caudal peduncle of these juveniles is also soft in color, surrounding a large dark spot. This spot on the caudal peduncle is what gives the specific name to this species, since in Greek 'spilos' means spot and 'oura' means tail.

The diet of Chlorurus spilurus is based on coralline algae, which it obtains by tearing off pieces of coral with its powerful beak, which after crushing them can digest the algae present, expelling after digestion the inorganic matter in the form of a fine sand. It is therefore a species with a great capacity to modify its environment, since this small modification that can exert a specimen multiplied by the many specimens present in the reefs, make them generate considerable amounts of sand. 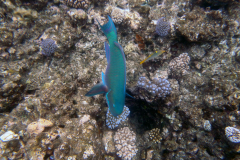 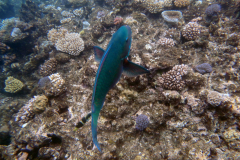