Scarus ghobban is one of the 52 members of the genus Scarus, which together with 9 additional genera make up the parrotfishes family (Scaridae) in which a total of 99 species are currently described. From the Red Sea to South Africa, and from southern Japan to Australia, and from the Gulf of California to Ecuador, as well as in the eastern Mediterranean Sea we can find this species. It is therefore a species with a very wide geographic distribution. Generally, we will observe the specimens of Scarus ghobban in shallow reefs, as well as in the adjacent areas with sandy and rocky bottoms up to 150 meters deep.

Female specimens or initial phase of Scarus ghobban are yellowish or yellowish green, with 5 irregular blue or whitish bars on the side. Male or terminal stage specimens are greenish blue on the dorsum with salmon pink scale edges. The underside of the flank is mostly salmon pink with green scale margins. It also has a pair of blue bands on the chin. Juveniles are pale with a slight yellowish tinge. They have stripes (3 dark stripes along the body) or bars (5 thin bars formed of whitish-blue spots) on the flanks of juveniles, as well as orange-yellowish vertical fins. 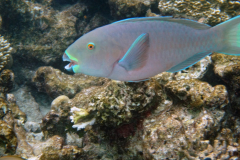 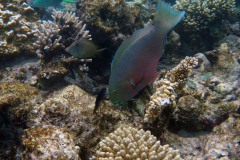 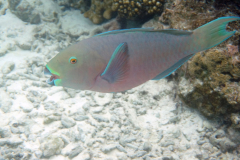