Scarus prasiognathos is one of the 52 members of the genus Scarus, which together with 9 additional genera make up the parrotfishes family (Scaridae) in which a total of 99 species are currently described. This species is found in both the Indian and Pacific Oceans, from the Maldives archipelago to Papua New Guinea, the Ryukyu Islands, the Philippines and the Palau Archipelago. It inhabits coral reefs, at depths of up to 25 meters.

The body of Scarus prasiognathos is oval, elongated and somewhat compressed laterally. The rostrum is robust and bluntly finished, with a small but very robust terminal mouth, in which its fused teeth stand out to form a strong beak. They can reach sizes of up to 41 cm in total length, although specimens between 20 and 30 cm in length are most common.

As with many other species of this genus, Scarus prasiognathos is a sequential hermaphrodite species. That is, individuals begin life as females (initial phase) and then change sex and become males (final phase). Female specimens are characterized by a dark reddish, almost blackish body coloration, dotted with numerous white dots that may form horizontal stripes. During this phase they are very similar to the species Scarus altipinnis, although the latter's face profile is not as rounded as in the case of Scarus prasiognathos, and the latter has a green line from below the eye to below the mouth. Males are easily distinguishable by their bright green cheek and muzzle.

We will often find the specimens of Scarus prasiognathos forming large schools in the calm waters of coral lagoons, as well as in the outer reefs. As a rule these large aggregations are intended to achieve the protective effect of a large group while they are feeding. The feeding of this species can be easily imagined by looking at their powerful and robust beak. With it they are able to tear off small pieces of coral tissue, to feed both on the coralline algae that grow on them, as well as on the polyps themselves. Behind them, and together with the action of other species with a similar feeding, they usually leave a trail of fine sand that can accumulate to form extensive sandbanks. 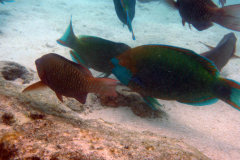