Scarus scaber is one of the 52 members of the genus Scarus, which together with 9 additional genera make up the parrotfishes family (Scaridae) in which a total of 99 species are currently described. This species is distributed in the waters of the Indian Ocean, from the east coast of Africa, the Red Sea, and as far as Thailand and Indonesia. They are inhabitants of large lagoons with coral slopes and inner reefs, where they inhabit up to 20 meters deep.

The body of Scarus scaber is typical of members of the parrotfish family, that is to say oval, elongated and laterally compressed. They can grow to sizes up to 35 cm in total length. They have a relatively large rostrum, with a small but very robust terminal mouth. The mouth is notable for its teeth, which are fused together to form hard beak that is mostly covered by the lips. The dorsal fin is continuous and consists of 9 spines and 10 soft rays. The anal fin has 3 spines and 9 soft rays. The pectoral fins have between 13 and 14 soft rays. And finally the caudal fin is truncated and slightly emarginate in females, and deeply emarginate in males.

Regarding coloration, a distinction must be made between females or initial stages, and males or terminal stages. Females have between 3 and 5 yellow dorsal stripes that can be more or less visible, on a grayish dark brown background. The lower part of the body of the females is beige. On the head, the brown of the dorsal part and the beige of the ventral part are clearly separated at the horizontal height of the eye by a dark gray stripe that runs from the operculum to in front of the eye. In contrast, terminal males have a region of the body comprising the entire head above the lower edge of the eye, which, after surpassing the vertical of the pectoral fins, turns towards the middle of the base of the dorsal fin. This region is dark blue or purplish gray. The rest of the body is green, with the edges of the scales in salmon pink, as well as a wide band of bluish green from the front of the snout that later joins another that arises from the chin, continuing both to the operculum. The bases of the fins are a more grayish-violet color, and the apical ends are electric blue.

Generally individuals in the initial phase (females) tend to form large groups, while males in the terminal phase tend to be more solitary. This species is quite similar to Scarus dimidiatus, although the latter is only present in the Pacific Ocean. 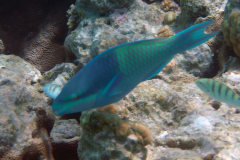 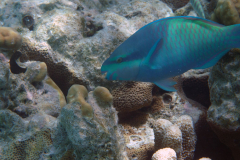 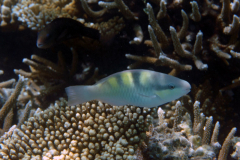