Sparisoma viride is one of the 15 members of the genus Sparisoma, which together with 9 additional genera make up the parrotfishes family (Scaridae) in which a total of 99 species are currently described. This species of parrotfish inhabits the waters of the western Atlantic Ocean, from southern Florida, Bermuda, Bahamas, including the entire Caribbean Sea to the waters of Brazil. It has a preference for shallow waters associated with coral reefs, where they are very active during the day, to seek shelter among the corals at night.

The body of Sparisoma viride is oval, elongated and laterally compressed, that is to say the typical shape of parrotfishes. Its face is rounded, and it has a robust and powerful terminal mouth, in which the teeths have fused together to form its strong beak. The dorsal fin has 9 spines and 10 soft rays, the anal fin has 3 spines and 9 soft rays, and the caudal fin is rounded in juveniles, truncated in intermediate sizes and lunate in large males. As with many other species of this genus, Sparisoma viride is a sequential hermaphrodite species. That is, individuals begin life as females (initial phase) and then change sex and become males (final phase).

In terms of coloration, a distinction must be made between the three possible phases. Juveniles are brown towards the back and reddish towards the belly. On their flanks they have a set of 3 rows of white dots that run from the top of the operculum to the base of the caudal fin. Above the operculum there is a dark spot. Finally, the caudal fin is also dark and has a white bar near its base. The females or initial stages are like the juveniles brown towards the back and reddish towards the belly. The scales in the central part of their bodies are pale in color. The base of the caudal fin is brown, with a white center and a wide crescent-shaped red spot in the outermost part. Finally, the male specimens in the final stage are green both on the body and on the rostrum. The edge of the operculum is pink, with a distinctive and striking yellow spot on the top of it. From the mouth and along the cheek there is a purple stripe. The upper and lower part of the face are purple. As for the coloration of the fins, the dorsal, anal and pelvic fins are pink with the outer edges blue. The caudal fin is green and has a yellow spot at the base, as well as a crescent-shaped spot. The extreme edge of the caudal fin is greenish blue. 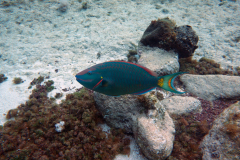 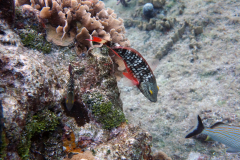 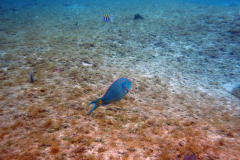 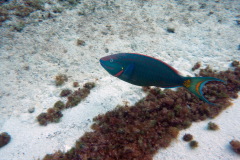 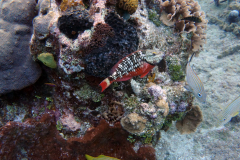