Siganus stellatus is one of the 29 species that make up the rabbitfishes family (Siganidae). This species is distributed in shallow and coastal waters at depths of up to 10 meters. Specimens of this species can be found from the coasts of East Africa, the Red Sea, southern India and the Andaman Sea.

With an elongated, tall and oval body, laterally compressed, Siganus stellatus can reach a maximum overall dimension of 40 cm. The dorsal profile of the head is almost straight, and the ventral profile is slightly concave. The dorsal fin has 13 spines and 10 soft rays. The first dorsal fin spine is shorter than the rest, and points forward. On the other hand, the fourth, fifth or sixth dorsal fin spines are the longest of all. The anal fin is formed by 7 robust spines and 9 soft rays, the last of the spines being the longest of all, equal in length to the longest dorsal fin spine. The caudal fin has an emarginate shape in juveniles, which gradually changes to a strongly forked shape in adults, with both fin lobes having rounded tips. 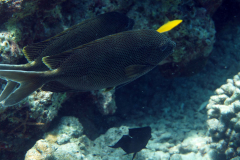 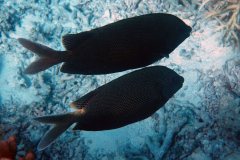