The body of Parapercis hexophtalma is elongated (up to 28 cm maximum total length), with the front end of the body cylindrical, and as it moves backwards it becomes more flattened laterally. The head is pointed, with the large eyes located in an upper lateral position. The mouth is slightly oblique and long, with the maxilla reaching the vertical posterior margin of the eyes. Both jaws have numerous canine and villiform teeth. On the operculum there is a robust spine, and the edges of the preoperculum are smooth. It has a single dorsal fin formed by 5 spiny rays followed by 21 soft rays. The anal fin has a single spine and 17 soft rays. The pectoral fins are elongated and have 17 rays, the first one unbranched and the remaining ones branched. The pelvic fins have 1 spine and 5 soft rays, and it is common for the specimen to lie on the seabed slightly opening its pelvic fins as a tripod.

The dorsal surface of the fish is greenish mottled with dark brown, the flanks are pale gray and the underparts are white. There is a lateral row of large white spots, each with one or more small black spots in the center. On the underparts are more black spots, mostly bordered with yellow. Females have brown spots on the head and males have yellowish-brown diagonal markings on the cheek. The dorsal fin has a black spot at the base of the spines and the caudal fin, which is rounded or has a short extension of the upper lobe, has a larger black spot. There are several rows of small black spots on the soft rays of the dorsal fin and one row on the anal fin. 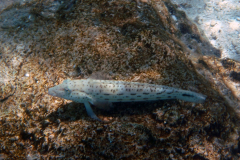 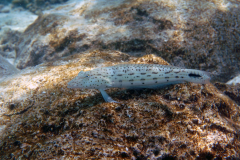 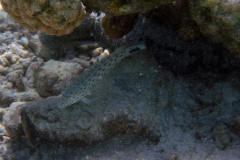 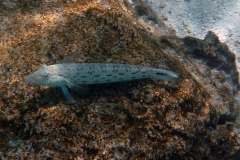 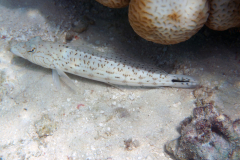 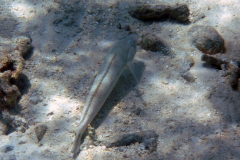 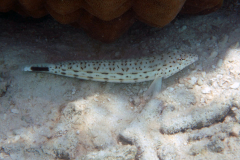 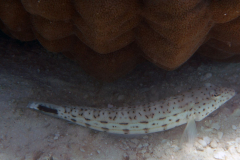 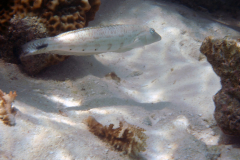 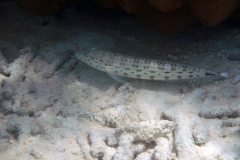