Aethaloperca rogaa is the only species belonging to the genus Aethaloperca, which together with 75 additional genera make up the sea basses family (Serranidae) in which a total of 538 species are currently described. This species of Serranidae is widely distributed throughout the Indian and Pacific Oceans, from the Red Sea and Persian Gulf to the east coast of Africa, Japan and Australia. In this extensive area, we will find this species predominantly on coral coasts as well as lagoons, and in general in bottoms where they find hollows and caves that allow them to take refuge. This species can be observed up to 60 meters deep.

The body of Aethaloperca rogaa is relatively tall and compressed, with a large and robust rostrum ending in an extensible and large mouth equipped with small canine teeth in the front. The dorsal region of the rostrum in front of the eyes is straight to slightly concave, while the posteriormost region is convex. The maximum total described length of this species is 60 cm. The preoperculum are serrated and have 3 flat spines on the operculum. The dorsal fin, which begins at the height of the vertical of the operculum, is continuous and consists of 9 spines and 17-18 soft rays. Between the spiny rays of the dorsal fin, the membrane is slightly indented, and the fourth or fifth spine is usually the longest of all. The anal fin has 3 spines and 8-9 soft rays. In both the dorsal and anal fins, the central rays are more developed than the rest in adult specimens. This gives both fins an angular profile in which the posterior margins of these fins are practically vertical. The pectoral fins are asymmetrical, with slightly longer anterior rays than posterior ones, and having a total of between 17 and 19 rays. The pelvic fins are inserted into the body in the same vertical position as the pectoral fins. Finally, the caudal fin is truncated with 8 branched rays at the top and 7 at the bottom.

Aethaloperca rogaa has a dark brown to black body, sometimes tinged with orange, and a pale vertical bar on the lower flank. The posterior part of the spiny portion of the dorsal fin varies in color from dark orange to brownish red. The oral cavity, gill cavity and upper jaw membranes are reddish to orange, hence the common name. Juveniles have a broad white posterior margin on the caudal fin and a thin white margin along the soft ray potion of the dorsal fin.

Juvenile Aethaloperca rogaa mimic angelfish of the genus Centropyge. This is a predatory species that feeds mainly on small fishes, including Pempheris spp. but also stomatopods and crustaceans. The redmouth grouper spawns throughout the year and reaches sexual maturity at around 35 centimeters in standard length. 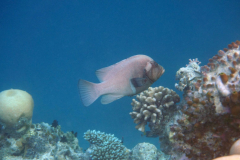