Cephalopholis argus is one of 24 members of the genus Cephalopholis, which together with 75 additional genera make up the sea basses family (Serranidae) in which a total of 538 species are currently described. This species is widely distributed in the temperate waters of the Indian and Pacific Oceans, from the Red Sea to South Africa, and eastward to French Polynesia and the Pitcairn Islands. It is also found in Australia and southern Japan. It is common to find this species in waters up to 40 meters deep.

Cephalopholis argus is a medium-sized fish that can reach up to 60 cm maximum total length. Its body is elongated, with a broad head, large mouth and small eyes. The dorsal profile of the rostrum is slightly concave except for the eye region which is flat. The preoperculum is rounded and has finely serrated margins in juveniles, and completely smooth in adults. The dorsal fin has 9 spines with indented interspinal membranes and 15-17 soft rays. The anal fin has 3 spines and 9 soft rays. The pectoral fins consist of 16-18 rays. The pectoral fins are longer than the pelvic fins, and finally the caudal fin is markedly rounded.

The body of Cephalopholis argus is dark brown, covered with small blue ocelli with black edges. Often we can identify on the flanks of the specimens between 5 and 6 vertical pale bars, as well as a large paler area on the chest. The posterior margin of the fins has a thin white line, while the most distal part of the pectoral fins are maroon brown.

Social units of up to 12 adult specimens of Cephalopholis argus that include a dominant male are common. These groups occupy a region of up to 2,000 square meters that is defended by the males and further subdivided into secondary territories that are inhabited by a single female.

The diet of Cephalopholis argus is mostly based on the ingestion of other fish. 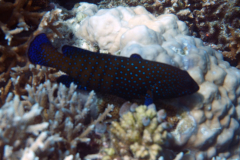 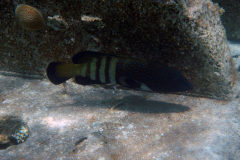 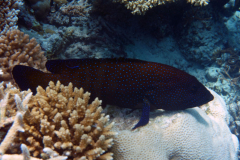 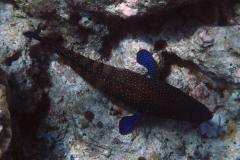 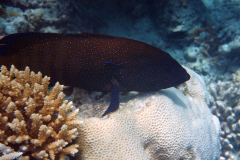