Epinephelus bleekeri is one of the 87 members of the genus Epinephelus, which together with 75 additional genera make up the sea basses family (Serranidae) in which a total of 538 species are currently described. This species is found in the waters of the Indian and Pacific Oceans, from the Persian Gulf to Taiwan, through Indonesia and northern Australia, Polynesia and Micronesia. It is a benthic species, which we can find in shallow banks as well as areas close to soft substrates at depths between 30 and 100 meters.

As for the body color of Epinephelus bleekeri, the color of its body and head is brownish, reddish-brownish or purplish gray and is covered with many reddish, orange, golden or yellowish circular markings. The dorsal fin and the upper third of the caudal fin also have circular spots like the rest of the body. The rest of the caudal fin is dark. The pectoral and pelvic fins, as well as the outermost part of the anal fin are also dark. In the upper jaw region, there is a thin black stripe running the length of the jaw. Juvenile specimens have 7 faint dark bars on the upper part of the body. The first two are in the nape region, and the last one on the caudal peduncle. These dark bars have dark spots along their margins. Juveniles have no dark spots on the head or fins.

The genus Epinephelus has the ability to change sex, more specifically they are protogynous hermaphrodites which means that females can become males at some point in their life. This sex change usually occurs in the non-breeding season and can be caused by social stimuli, age, growth and body size. However, the initial trigger for sex change remains unknown. 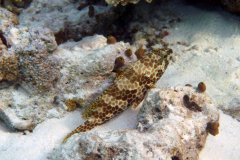 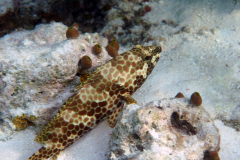 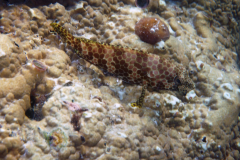 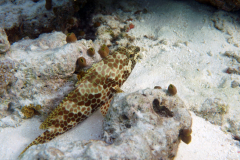 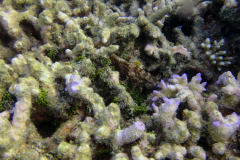